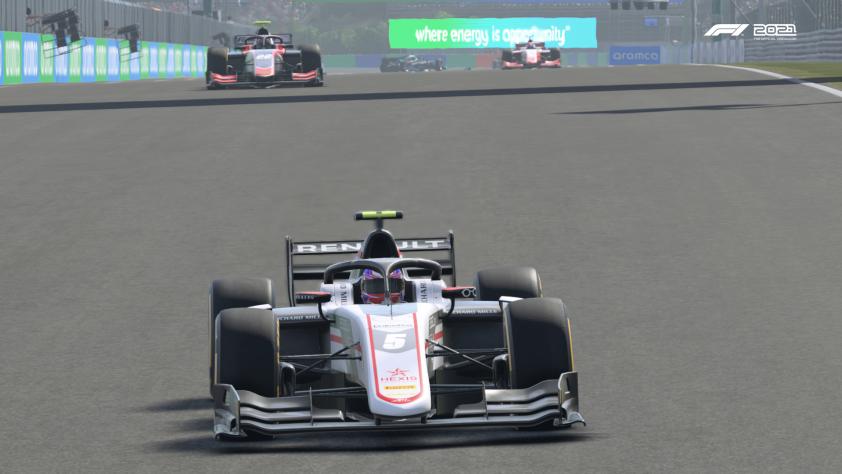 Was anyone…….Hungary? If so then great. Round seven takes us to Hungaroring where last season in both the feature and the sprint race it was heavy rain. With also heavy rain last time out at Silverstone in the sprint all our stars of tomorrow…..today will be hoping for a dry round. They wasn’t disappointed.

One Shot Quali! For qualifying as expected it was the usual names at the front showing their class. Raceroller took F2 pole for the second time this season to just pip the inform SLR Darnell. UNI Virtuosi teammate Crispy2001 had to settle for third on row three along with MasonGammon05 who yet again showed great qualifying pace. J Lee Menz qualified ninth to take highest Evo Class qualifier in a round where the absence of Evo rivals SLR Dodgy and NonRipeLoki meant it was important for the Campos driver to take advantage.

The Feature! The Hungaroring has always been branded Monaco with trees due to the difficulty of overtaking and this was the case for the first quarter of the race. Right at the start we saw SLR Cech drop a couple of places and SLR Bennett dropping right to the back of the field following contact sending the MP driver round at turn two. Lap five and the safety car was out! SLR Southerner has crashed into the barrier and retired with an unforced error! The first in his SLR career. During the safety car period we saw a few drivers play it extremely smart by pitting twice where they end up back on the medium tyres and no longer having to pit again. Menz being the highest placed driver to do this followed by SLR Bennett and Caton98. Lap nine we resume where our top three remains Raceroller, Darnell and Crispy. Darnell and UKBeastAssassin would be the first to blink and pit attempting the undercut. Darnell would do this with great success until Raceroller would repass the UNI driver when stuck behind OG James for a few corners. After all the stops your race leader was J Lee Menz! Who saw this coming? Following behind was his reserve teammate ARL PReDaToRZz who decided to try and stretch the softs from the safety car period. Raceroller, Darnell and Crispy were all carving their way through the pack into podium positions and to hunt down the leader! Can Menz hang on?! Every corner they are catching but it isn’t enough! I cant believe I’m saying this but J Lee Menz wins the feature race to become an SLR Formula 2 winner! Absolutely nobody saw this coming! With the feature win he would also take the Evo Class win. Menz would create history to become the first ever Evo class driver to win an official Formula 2 race. Raceroller and Darnell would take the other podium positions just edging Crispy who had to settle for fourth. On his Formula 2 debut ARL PReDaToRZz would brilliantly finish fifth with Bennett making a great recovery to sixth. UKBeastAssassin finished seventh ahead of MasonGammon with Caton98 finishing ninth to also score his first Formula 2 points just ahead of Cech in tenth.

The Sprint! MasonGammon would start pole ahead of Beast with Bennett and Predz behind in row two. Away we went and there was plenty of driver movements within the first two corners. Beast would take the lead! Gammon would fall two spots to third with SLR Darnell making up four places going into turn one with immense bravery. After a few laps we began to see gaps especially up the front where the top three in Beast, Darnell and Crispy would start to pull away. Lap four it was quite the contrast in races for Menz who after winning the feature would spin into the barrier resulting in damage and having to pit. Looking further back in the field we had an absolute amazing battle going on for fifth. Bennett, Raceroller, Cech and Van Doorne all fighting like crazy with amazing race craft. This is what F2 is all about! A crazy duel behind the Bennett bus. Lap eight we would see the safety car again this round where this time Monkey fell victim to the exit of the last corner. This led to drivers towards the back of the field pitting for softs hoping for a mad last few laps with a tyre advantage. We resume with three laps to go where the only movement we see is Raceroller finally get passed Bennett. Come the finish it was another win for the inform Darnell. Crispy would finish P2 to yet again complete another UNI Virtuosi one – two. MasonGammon would score his first ever SLR Formula 2 podium in third. Raceroller and Bennett would take fourth and fifth. SLR Southerner would finish eleven places higher than he started to score his only points this round in sixth. Beast would cross the line first but time penalties meant the Charouz driver would finish seventh just ahead of Caton98 who made it a double points scoring round for the reserve driver. J Lee Menz would finish thirteenth but still win the Sprint in the Evo Class.

Round seven proved to be incredibly unpredictable with a new winner, new podium finisher and new points scorers. This is why we love SLR Formula 2! We only have to wait another week to see it all over again where we are off to Belgium! Anyone fancy a Spa?

Blogs Driver of the Round: J Lee Menz

Original96 vs SLR Baggie – Sprint race Lap 14
Outcome: No further action
Reason: There is contact which we believe to be a racing incident, after the contact Original receives a penalty, whilst this was not his fault the stewards are unable to remove these penalty’s