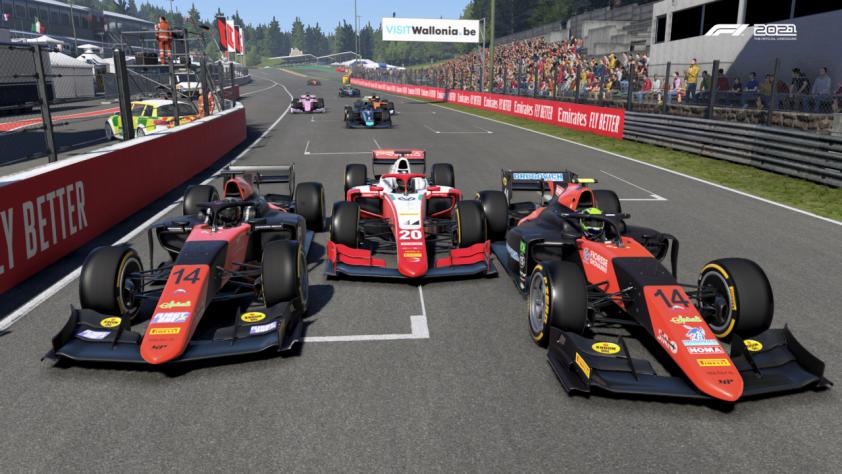 Round Eight of the SLR Formula 2 season sees us reach the halfway point of the season where we race in Belgium at the legendary Spa Francorchamps circuit. A track known for its high speed and fast corners is always a thrilling challenge for our stars of tomorrow…..today. Will Raceroller remain the championship leader come the end of the round?

One Shot Quali! We saw our closest ever one shot qualifying in Formula 2 where three drivers were separated by just 0.022! SLR Darnell for the fourth time this season claimed pole with Crispy second with yet again another UNI Virtuosi front row lock out. SLR Dylan would be that third man sharing row two with UKBeastAssassin. SLR Dodgy qualified tenth to qualify as the highest Evo Class driver.

The Feature! For the main event of the round we started off with heavy rain conditions where later on in the race we would see the track dry out towards the end. Going up weardale for the first time we saw an early retirement from Evo class championship leader SLR Dodgy after unfortunate contact with SLR Fempest on his SLR F2 debut. This resulted in a VSC where once ended caught out both UNI Virtuosi drivers where they were both awarded drive through penalties for being over their delta. Few laps in and the wet conditions created amazing duels all over the place most notably Beast vs the returning II Division II and SLR Ham vs SLR Southerner with SLR Van Doorne close behind. We would see drama shortly after between the dutch duo of Dylan and Division which resulted in massive contact with both losing lots of time and positions. Meanwhile up front Raceroller had a comfortable three second lead. Lap six Van Doorne had a lap to forget where not once but twice ended up facing the wrong way following contact in separate incidents. Further back in tenth we had a thrilling battle where Baggiefan was defending for all his worth to keep four drivers behind trying to get past but after a few more laps later would eventually succumb. The track is drying and SLR Jam is the first to pit onto the slicks! Crispy and Dylan would follow but it just be a lap too early as the lap later most of the grid would then pit onto the slicks where they would either reduce or extend the gap to drivers who pitted earlier. SLR Darnell would pit a lap later and SLR Niki would try and risk it all to take the wets to the end! With two laps to go Niki would have a twenty five second lead but unfortunately it still wouldn’t be enough as Raceroller would rapidly close that gap and a puncture in the end for the Finnish driver would take away the chance of a win. Raceroller takes the feature race win with UKBeastAssassin coming home in second. After a couple of off weeks SLR Southerner would return to the podium just pipping last seasons champion Ham who had penalties. SLR Niki despite the puncture would still finish strong in fifth ahead of SLR Darnell recovering from a drive through and SLR Jam. Van Doorne, Crispy and Dylan would take the remaining points positions with the winner of the Evo Class feature for the first time this season was OG James just snatching the win off Baggiefan following time penalties.

The Sprint! Van Doorne starts on reverse grid pole with Jam joining him on the front row. Behind on row two we have Darnell and Niki. Away we went again for this time a sunny race. Somehow we saw no chaos on lap one despite seeing four cars side by side going along the Kemmel straight. Lap two this round got from bad to worse for Crispy after a spin put him at the back of the pack. It would get worse later on as the UNI driver would eventually crash and retire from the race ending a torrid round for the title contender. Whilst Van Doorne, Darnell and Niki were all close fighting for the win Jam would suffer a strange crash where either his wheel switched off or he got knocked out by a passing bumble bee as i swear those things are getting bigger. Darnell would get a three second time penalty for track exceeding ending his chance of another sprint win meaning the battle for second between Niki and Van Doorne would in fact be the battle for the win. By a small margin Niki would take the win just ahead of Van Doorne! Darnell would have to settle for third beating his brother Southerner who finished fourth. UKBeastAssassin came fifth ahead of Division who scored his first points on his return. Feature winner Raceroller seventh and Dylan would take the remaining points scoring positions. It was a close finish in the Evo class where J Lee Menz denied OG James from making it a Evo double to win by 0.033.

We now enter the second half of the season where we more or less know who our championship contenders are. After a round to forget for Crispy the championship lead would now extend in Racerollers favour. Will it change once more after we head to our next round to the Netherlands!

Blogs Driver of the Round: SLR Niki

Reason: Crispy2001 is side-by-side with SLR Dylan on the straight, SLR Dylan is in the slipstream of the car ahead. Crispy2001, in an attempt to take the slipstream, swerves into SLR Dylan and puts him into the wall. There is no need to swerve drastically on a straight, hence the penalty is awarded.

Reason: FemPest goes slightly wide at Eau Rouge, this means at Raidillon he must turn left more drastically. As a result, FemPest loses control and over-corrects into Dodgy instantly DNFing him. Although clearly unintentional, the reason for the penalty is because it caused a DNF and could potentially have been avoided with slight lift into Raidillon.