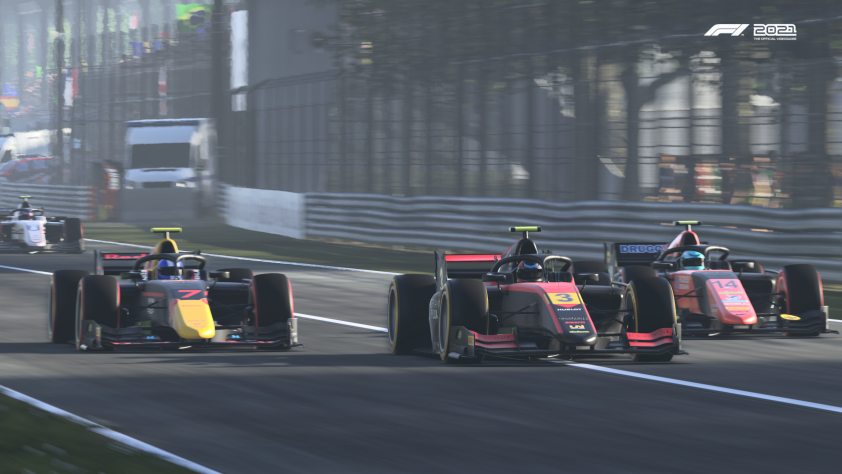 Round ten of the SLR Formula 2 season takes us to Monza the temple of speed! Or based from previous seasons the temple of chaos! It was a cause for celebration as when the lights go out for the sprint they will go out for the one hundredth time in SLR F2! Unfortunately not all who signed up were able to race due to the Codemasters servers being clapped. The notable absence awfully being title contender Crispy2001 who’s title challenge has taken a massive blow to maybe the point of no return.

One Shot Quali! Raceroller would immediately take advance of his title rivals absence to claim pole ahead of SLR Darnell. Gap only a tenth to set up an exciting duel for the race. SLR Bennett and a F2 personal best Qualifying from OwenHowell made a very interesting looking for row two with J Lee Menz achieving best Evo qualifier in ninth.

The Feature! Lap one didn’t see drama but only action! We were seeing three sometimes four cars side by side going down the straights fighting for position. SLR Bennett was a man possessed early on who took the lead brilliantly from Championship leader Raceroller with a move round the outside at ascari. An SLR Xhaka crash brought out the VSC where on restart a small mistake from Bennett resulted in SLR Darnell taking the lead who earlier made a place on Raceroller following a mistake from the scot. For the next few laps despite being on the harder tyre Darnell would pull away from the pack behind as Bennett and Raceroller were scrapping for second which eventually invited SLR Southerner and OwenHowell to the party. Southerner was the first to pit to attempt an undercut which proved successful jumping both Raceroller and Bennett however for the latter had a longer pitstop due to front wing damage. Once everyone had made their stop it remained Darnell in the lead on a fresh set of softs…..its looking good for him with Raceroller seconds behind after making the move for second on Southerner. A crash on the exit out of ascari from SLR Semm brought out a very late safety car to bunch up all the field where only one driver in the top eight had no penalties. That driver being Southerner in fourth. With two laps of racing to go we saw no overtakes but gaps stretching meaning Darnell was able to hold off Raceroller to cross the line first and second but your winner without penalties for the second ever time was Southerner! Southerner would lead a Darnell one – two with SLR Darnell finishing second and UKBeastAssassin claiming third to make it an F2 Admin one – two – three! Raceroller would have to settle for fourth just ahead of SLR Ham who both lost out with time penalties. Then we had some Evo drivers finishing in the points with SLR Dodgy being your Evo feature winner pipping teammate Menz and OG James who would score his first F2 points of the season and claim reverse grid pole for the Sprint. OwenHowell finished ninth with in tenth for the first time in his F2 career to equal the record with great friend Baggiefan 1995 for longest streak without a point N1GHT RANG3R would get his first F2 point!

The Sprint! We had an interesting front three where we had OG James and J Lee Menz on the front row with SLR Dodgy just behind in third sharing the second row with reigning champion Ham. For the one hundredth time in SLR F2 we are away and OG James comes out of the first chicane in the lead. Come the second chicane Semm mistimes his braking to clobber a Campos who fortunately was lucky to escape any damage. Wasnt long until we began to see the moves! The Campos drivers would begin to fall down the order but OG James was in dreamland extending his lead at the front. Once Raceroller got himself into second within a lap he closed the gap and passed OG James for the lead. For the next few laps we saw a thrilling display from the Evo driver dancing with the F2 big guns of SLR Darnell and UKBeastAssassin. Eventually succumbing OG James would fall further back until contact with Menz sent the sprint pole sitter into the gravel ending his hopes of a double points finish. Raceroller was clear at the front but behind him were interesting battles for second between Beast and Darnell and further down in fourth. In fourth it was Southern rail where Southerner was trying to keep behind three drivers one being SLR Ham who had recovered greatly from his spin earlier in the race. Going round ascari for the last time we saw great moves for place gains from Darnell and Ham so all the action went right to the end! Talking of the end it was Raceroller to take victory and on the podium with him its Darnell in second with Beast in third on his one hundredth F2 appearance. Ham pipped Southerner to fourth following a great battle and further back in sixth and also the Evo sprint win provisionally it was J Lee Menz who would just beat teammate SLR Dodgy. OwenHowell would take the final points scoring position.

Monza this season may not have been as chaotic as previous but it wasn’t short of action. Seeing Evo drivers fighting it with the big guns this round is why we all love SLR Formula 2. What a race to do it also as we reached race one hundred! Following the absence of Crispy it would mean Raceroller would extend his lead greatly however in the Evo class championship it was incredibly close between the Campos pairing! No race next week so our stars of tomorrow…..today have a well earned rest where we see familiar faces return to the full time grid. We will see you in Portimao to cech this out!

Callum that feature win was for you bro

Blogs Driver of the Round: SLR Ham19

OG James 96 vs J Lee Menz (Lap 9)
Outcome: Racing Incident
Reason: Going into the corner they are side by side in a close battle, the stewards do not believe Menz is at fault with it instead by a racing incident and unlucky more than anything.