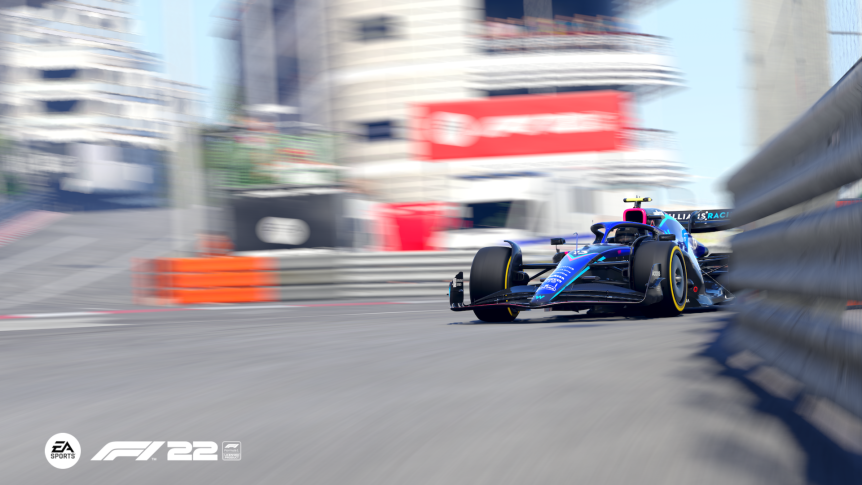 SLR Corey took pole around the Principality with a blistering lap narrowly edging out Crispy who performed brilliantly to take P2.

The race started on chaotic fashion with Dylan failing to move off of the line from his P3 slot.
An incident further back at the Casino, Mirabeau and then the Lowes hairpin involving Jensen, Ham and F1 Driver saw all 3 drivers ghosting through one another with Jensen being spun as a result of the aforementioned desync.

Incidents throughout the first dozen or so laps saw multiple of the front running drivers either in for early stops or out.

Jam pitted early with wing damage along with Corey and Roller. Dylan and Snypz had a coming together and subsequently both retired early on.

This allowed Ogween to over cut an early stopping Cruspy and Corey to take the lead. Crispy also jumped the Williams as it out for repairs.

At the same time Ham was able to jump Jam in the stops after the Ferrari driver pit for a new front wing.
Semm had gotten himself into the fight for the lead with some serious pace on display, he joined the four car battle for the lead which ultimately became three after Corey picked up more damage.

Roller and Crowding were leading at this point after both starting on the hard compound tyres. After the pair had made their stops the order was. Ogween, Crispy, Semm, Jam, Ham, F1 driver, Bezzas, crowding, Elite and Rollee.

Ham had picked up damage and Jam had reclaimed the position he lost earlier on in the race. Bezzas had also pit early and been caught out as a result. He’d go on to spend the rest of the afternoon stuck before a slow Ham after the damage the Red Bull had picked up speed his pace.

Speaking of Red Bull’s with damage Roller was seemingly making it his mission to go for the record of the most pit stops in a race as he pit on 3 consecutive laps to repair damage.

F1 driver and crowding would both get past Bezzas and then Ham before setting their sights on Jam and fourth place. The Alfa Romeo would overtake Jam but penalties would later put him back behind last weeks race winner.

Ogween ultimately romped to a second win of the season taking the chequered flag nearly 9 seconds ahead of Crispy, who ran out of fuel on the last corner of the last lap which, in what can only be described as the most unlucky retirement of all time caught out Semm who hit the back of the Mercedes and spun into the wall suffering terminal damage.

This would promote F1 driver to third but as mentioned earlier he’d lose this place to Jam on penalties, Crowding came home fifth with Ham sixth holding on from Bezzas who was surely frustrated with being stuck behind the Red Bull for so long. Jib Jab came home 8th with a solid drive on the alternate strategy with Elite in 9th after pitting late for the fastest lap. Semm would come home 10th despite crashing as Roller, the only other driver to finish the race was a lap down after making 5 pit stops.

So then after all the chaos that a race at Monaco expectedly provides it was Ogween who took a second victory of the season and the championship lead.

Next up is the Azerbaijan Grand Prix around the streets of Baku another race where I’m sure we’ll see plenty of carbon fibre flying and overtakes occurring!

Evidence provided shows the following car of F1driver appears to miss his braking point or brake too late and knocks into Snypz causing him to gain wing damage from the touch into the wall. F1driver also does not give the position back down the main straight which could be argued was the right thing to do. Due to the damage, we have to give this penalty.

Very difficult incident to judge so let me explain. Any issues, speak with head steward & we can discuss.

Leading up the hill, the ghosting and driving through cars is clear to see and does cause difficulty for other drivers to manage. Despite this, F1Driver has not done any moves or caused any incidents which we should look into, though he has gained advantage which will address at the end of this incident report. I would like to ask if the admin team would be able to judge the lag and DeSync we get from this driver specifically compared to the rest of the field and judge from here.

Coming into Mirabeau, we only received two bits of evidence and will base from there.

We see Ham inside F1Driver as they battle for position. Realistically, this is a poor decision from F1driver to drive and take normal lines despite the cars already there. My opinion is where and what do you expect of him in that situation?
It’s a two wide corner at most, if that, and looking from an outsider view is causing no effect – though visual – to the race. I believe there is no blame led to him here as I can’t issue a penalty, when he has no other options. Ham locks up into Mirabeau nearly clipping the rear of RaceRoller and comes back into the race alongside (but behind slightly) Crowding.

For me, the next part is where I look for the issues at hand.

F1driver is ahead of Jensen through the hairpin. Jensen is exiting the corner too as Ham clips the back of him throughout the corner causing him to spin. This is puzzling to us as the game has Jensen as ghosted. It seems the battle was between Ham and Crowding but Ham sent it a little too much and knocked the back of Jensen. The issue we see is that Jensen is desynced for certain cars and not for others. Ham does clip the back of Jensen and causes him to spin but, we are in agreement that the incident is not through ham – despite the contact – BECAUSE the game registers that Jensen is a ghost for Ham yet contact is registered for reasons we cannot explain. Hence why this is not a penalty for Ham.

From the part I mentioned, I’m not sure what else F1Driver can do other than race his normal race. I don’t judge this as illegal overtake. However, we have to address the fact that F1Driver overtakes 3 cars with no hesitation. We think a 3s & 1LP is fair for F1Driver as the advantage gained is knocked out by the punishment.

Again, coming through the hairpin this time F1Driver is not ghosted or DeSync’d. He appears to push his way through the hairpin making an outrageous move around the outside which just does not come off in racing round Monaco. There simply isn’t the room to make it & contact is made upon exit. After a second bit of contact, F1Driver takes his opportunity to take the position without returning it to Ham for the incident. Slam dunk penalty unfortunately for F1Driver.

It is a track that most people dread but some love, but it most definitely always brings battles as people look for past on this very narrow circuit, with the championship beginning to get closer with SimbarocksONE closer to the top, what a place to see if that can be changed even further.

For Qualifying there were a few crashes with drivers trying to find the limit, with Leviking16 being the most notable one but it would be SLR Quattro to claim another pole position this season showing he is a driver to look out for still and will push to get closer to the title.

The race was one of extreme patience with a lot of different DRS trains, there were also 4 DNFs during the race but no Safety Cars so that’s Monaco for you. But the winner of the race is still in the air as there was a timing glitch and it is between KevinGT9389 or SLR EVVO, which either way would be a first win in the division for both and EVVO’s debut race if he was to win which is some drive.

The race was entertaining watching the drivers work their way around the infamous circuit but next week is Baku which is a similar style but one where a Safety Car can actually come out which will bring a new challenge from this week but until then, have an awesome week!

This is very tight to call but the move is made whilst EggFryer is off track and there is no attempt to give the place back.

Josh Vs SLR Morgan – QB and 3LP to SLR Morgan for causing a collision.

There are plenty of other opportunities for Morgan to let Josh through but he decides to do it in an awkward place and slows right in front of Josh, without really moving off the racing line.

After reviewing the footage, it is clear that the collision is instigated by legend hitting the back of Morgan.

SLR Leah Vs SLR Marsh – 10s and 2LP to Marsh for spinning another car.

SLR Leah Vs SLR Morgan – 10s and 2LP to SLR Morgan for causing a collision.

Whilst Leah does hit the wall initially, Morgan does not leave him enough room when there is space on the right for him to do so, the second collision that send Leah into the wall wouldn’t have happened if more room had been left.

Lap 1 incident involving dRaSt1k bLazE Outcome: No Further Action Reason: Stewards agreed that was just an unfortunate lap 1 incident into the hairpin where drivers should have been more cautious as they was all very close together.

——————Division 4 Report — Monaco—————-
We watch Formula one and we see a Red Bull dominate, and in SLR Division four a chance to get away from real life… saw the exact same outcome as Darkstorm stormed to victory, lapping close to all of the field bar one.

A rompant victory saw him finish 43 seconds ahead of Harvey who boxed late to get a fresh set of softs to take P2 and the fastest lap. The podium was finalised by SLR Hicklin, I believe Hicklin’s 2nd podium here in a few seasons.

A one stopper saw SmithHPDan take p4 after starting there, a nice return to the grid for the Ferrari driver securing a 3rd/4th for the constructor.

An early stop meant a late stop for Pazuzu, but he continued his consistency this season with a p5.

A late battle between richie Chappell and Maxwell saw the latter make a late mistake to get a penalty and saw the Mercedes man Richie take p6 ahead of Maxwell in 7th.

Starsorphan6 saw a 3 strategy reward with a 9th place and 2 points, whilst DaZe FR34K took home the final point.

Stevo was the last of the finishers in 11th and kudos to him for sticking in, in the hope that someone retired, they unfortunately didn’t so his great effort was not rewarded.

Last season saw many drivers lose it in sector 3 at Baku last year, will history repeat itself? Find out next week.

Incident 1: WimenLex – Qualifying, Retiring on track/crashing on purpose
Outcome: Qualifying ban and 4 license points to WimenLex
Reason: WimenLex purposefully crashes out on the exit of the swimming pool section after invalidating his flying lap. This behaviour is frowned upon by the stewards and as such the penalty is in line with retiring on track as previously given in a previous race

Incident 2: Lenbau04 – Pre-Race, Readied up before the end of the 5 minute break
Outcome: Qualifying ban and 3 license points to Lenbau04
Reason: As Lenbau04 failed to finish the race, the assigned penalty is the standard given for this incident.

Incident 4: SLR Hicklin and Starsorphan6 – Qualifying, Blocking
Outcome: 10 second time penalty and 2 license points to Starsorphan6
Reason: This penalty is in line with a previous penalty given by the stewards for blocking during qualifying