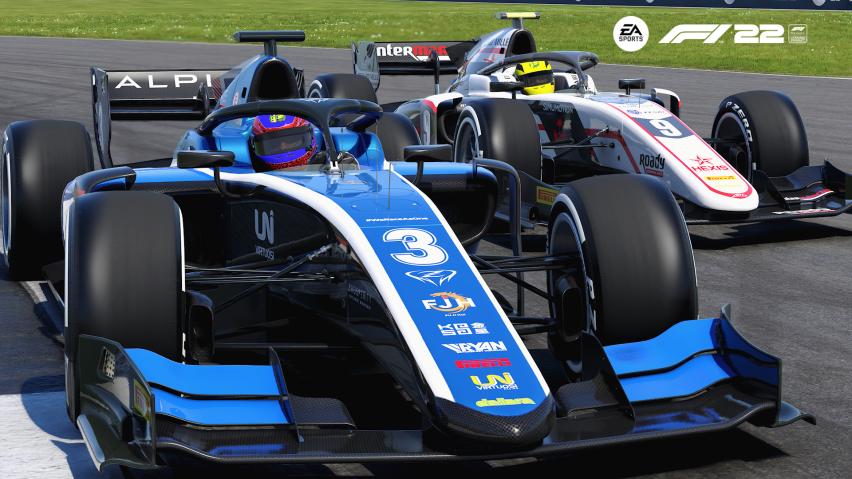 Not all hero’s wear capes!

SLR F2 is back and so is these more boring and much longer F2 blogs from yours truly. Thanks to the true hero of the round SLR Semm we actually had a stream! For a quick recap etc just look at the standings as I’m in a rush as I’m currently on my lunch hour at work.

One Shot Quali! Crispy is absent this week so of course SLR Corey is your pole man! Big round for the Trident driver following the reigning champions absence. Darnell narrowly missed out on pole by 0.045.

The Sprint! Division is your man on reverse grid pole. F***ing chaos! Owen spins at turn one but at least he has another race to not repeat it…. Division was your leader until the likes of UKBeast and Ham caught up to overtake him. Beast would gradually stretch the lead but later clowned with a track exceeding pen which put the F2 goat Ham within a chance of a win. Menz proved to be quite the immoveable object up to the point he decided to say hello to the gravel down the old home straight because of Para and the amazing contact system on this flawless game. Lap six Owen spins again. Corey started to show rapid pace to get into third and close the gap to the leaders. Owen spins again. Come the finish SLR Ham takes his twenty ninth SLR F2 win on his one hundredth race! SLR Corey takes second with UKBeast dropping to third because of his penalty. Division finishes fourth ahead of SLR Southerner who made up eleven places from his grid position. Para finishes sixth just pipping SLR Dodgy and provisionally SLR Darnell for the rest of the points. SLR Marsh was your Sprint race winner in the Evo class which appears to be currently going down the shitter.

The Feature! Away we go. Owen spins again….at turn one again. Corey decided to flex early with his pace and immediately created a gap to the Darnell without an SLR Title. Corey may have decided to give his all now incase the stewards decided to call him in again. Lap two Para spins at copse attempting to make a move on Menz. Menz slamming the door so hard Para almost ended up back in F1 2021. SLR Dodgy decided to be a train and roll back the seasons in a battle for seventh with Menz. Menz, the UKs weapon of defence against Russia was in the wars again this time with SLR Ham. Out front Corey is still stretching his lead from SLR Darnell. Behind in fourth best mates Griffiths and UKBeast were enjoying a great ding dong with each other. Was kinda cute. After the pit stop phase Darnell was making the most of the softer tyre to close the gap to Corey…..turns out the Trident driver was just cock teasing and eventually created a gap again. For the rest of the race it was only worth watching the battle for seventh between Division, Para, Merkz and Dodgy. This is what SLR F2 is all about! F***ing content! Ahhh Para spun. Lap fifteen Owen spins again. Para on his last lap also decided to go off-road to put on a show to the fans who were in absolute delight to cheer SLR Corey across the line to win the feature! Darnell finishes second with UKBeast taking another third from Griffiths who showed massive respect and fair-play in the last corner. Cute between the two again. Jam takes a lonely fifth with Southerner in sixth again with another goated performance. SLR Dodgy takes seven heaven again narrowly beating Merkz and Division. Menz takes the last point in tenth along with the Evo feature win!

Well thats Silverstone! See you next week in Austria where hopefully SLR Corey isn’t as greedy with his Fastest Lap points but also isn’t so washed that he was three points away from taking maximum points for a two race round! Siu!

Blogs Driver of the Round: SLR Corey

Merkz47 vs SLR Darnell Sprint – Lap 6
Verdict: 10 second 2 LP to SLR Darnell
SLR Darnell taps the rear of Merkz47 car sending him round out of Copse.

OwenHowell36 vs J Lee Menz Feature – Lap 1
Verdict: Racing Incident
OwenHowell36 is unlucky to get caught up Menz leaves sufficient gap this time around to Ham and Ham has to make a correction.